Daniel Hawkins | A Storm In Any Port
Daniel Hawkins is a contemporary artist based in Los Angeles.
articles
40
page-template-default,page,page-id-40,_masterslider,_ms_version_3.7.8,ajax_fade,page_not_loaded,,qode-title-hidden,qode-content-sidebar-responsive,qode-theme-ver-16.6,qode-theme-bridge,disabled_footer_top,disabled_footer_bottom,wpb-js-composer js-comp-ver-5.5.1,vc_responsive

A Storm In Any Port

I first became aware of Daniel Hawkins’ artwork when he was still an undergrad at UCLA in a senior painting class taught by my wife, M.A. Peers. Daniel was already producing remarkably sophisticated work, including two of the funniest and richest engagements with the problematics of painting-as-event and painting-as-artifact I’ve ever seen. In the one, he videotaped himself from above, attempting to clean a paint spill with a broom but only managing to fill a monochrome rectangle with the wayward medium.

The resulting AbEx gestural documentary (a cinematographic inversion of the famous glass sequence from Namuth’s 1951 Pollock Painting) was then projected onto a vertical stretched canvas of the same dimensions as the original surface (p. 23, 1). In the other, he embedded a blank stretched canvas in a monolithic slab of cast concrete, then (eventually) proceeded to attempt to excavate it (p. 23, 2). Antics ensued. In spite of their high conceptualist quotient and canny humor, both pieces – as with all of Hawkins’ work — possessed a stark, effortless formal beauty. Here was one to keep an eye on.

He didn’t disappoint, embarking on a series of ambitious, narrative-laden, interwoven interdisciplinary projects, including an attempt to realize Radical Mountain – an alpine adventure film about the conquest of a summit with an elevation of zero; a making-of documentary about the aborted first attempt; and a fictionalized documentary about the auteur’s campaign to secure the acting services of Val Kilmer. At Las Cienegas Projects Hawkins showed a funhouse-optics sculptural installation that extended a section of railroad tracks into infinity: a hiccup in the Great Western Matrix, a ghostly manifestation of the iconic depiction of one-point linear perspective; Manifest Destiny as a house of mirrors (p. 23, 3).

Other enterprises included infiltrating a reality television show about bizarre food addictions as the concerned friend of an actor cohort who in turn pretended to be living entirely off a variety of vinegars (p. 23, 4); a series of solo improvised sound art performances played entirely on the amplified lid of a peperoncini jar; some sort of road trip/endurance test involving the confining of a death metal band in a van tricked out as a portable studio/pirate radio transmitter for two weeks; and the long-term building of an actual size replica of the Hoover Dam in manageable sections to be distributed across the American landscape (pp.23, 5). And this was all before entering grad school!

Some of these projects were completed, some have been partially completed at press time, some seem impossible to complete. I’m not sure where, but at some point it became apparent that Hawkins was often deliberately undertaking absurdly Sisyphean tasks as a mechanism of stochastic creativity, simultaneously generating fatally flawed artifacts and exquisitely painful, deeply humorous narratives about their unraveling. Hawkins’ array of interwoven, already-nuanced throughlines takes on a further layer of Greek tragedy; of mimesis, catharsis, punished hubris and Gods Gone Wild.

The Herzog connection is notable because Hawkins actually cites the BavariAngeleno™ opera buff as an inspiration. In addition to sharing Herzog’s darkly absurdist sense of humor and attraction to epic cycles of grandiosity, failure, and rationalization, Hawkins’ oeuvre is characterized by a similarly ambivalent – or rather, multivalent — relationship to documentary and fictive modes of storytelling and the numberless incremental shades between these poles. While this set of criteria may be fruitfully utilized in the analysis of any of Hawkins’ aforementioned works, it has reached its apogee – thus far – in the trilogy of Desert Lighthouse exhibits, and the sprawling, quixotic, uncategorizable project from which they are drawn.

Although ostensibly an architectural Land Art intervention – and, as such, extending its conceptual tendrils to connect with such other desert modifiers as Robert Smithson (no slouch at courting failure himself), Michael Heizer, Nancy Holt, James Turrell, and Walter de Maria (particularly the last three, who have each created signature works that incorporate light and architecture as their central components), Desert Lighthouse incorporates media and genres as disparate as panoramic landscape painting, printmaking, drawing, architectural engineering, performance, relational aesthetics, institutional mimicry, video, sound art, and digital imaging and animation.

In spite of this rich material outpouring, the Desert Lighthouse is at heart a conceptual work — albeit one that is unafraid to flirt with formalism and narrative when it serves its purposes. Professor Burns does an admirable job of unpacking Hawkins’ initial trunkload of semiotic baggage in his accompanying essay. But as with many Modernist icons – from Duchamp’s Fountain (1917) to Michael Heizer’s Double Negative (1969) to Jeffrey Vallance’s Blinky the Friendly Hen (1978) – the bulk of the meaning is unlocked in the act of displacement.

This central conceit – the displacement of the symbolically loaded structure of a functioning lighthouse into the diametrically opposite environment from the only one in which it makes sense – has provoked considerable speculation above and beyond the official “agoraphobic panic” origin myth. One local observer suggested that the beacon was intended for the Space Brothers, while another speculated on the imminent proliferation of wind-powered desert “sand yachts” after the oil runs out.

Other environmentalist-tinged readings include the DL as a theatrical prophecy of the landscape in the wake of a coming global drought – every lighthouse will be a desert lighthouse; or as a warning about the adjacent contamination plume of hexavalent chromium in the local water table, made famous by Steven Soderbergh’s 2000 film Erin Brockovich – an environmental intervention generated by the anti-corrosive circulatory runoff from a natural gas cooling tower – a dark doppelgänger lighthouse, an icy siren, poisoning the landscape to keep its potential energy contained and commodifiable.

Hawkins’ Desert Lighthouse, in contrast, smacks of socially engaged Interrogative Design, verging on the ambivalently absurdist philanthropy lurking in Krzysztof Wodiczko’s Homeless Vehicle Project (1988-89), marshalling enormous resources to realize a displaced anachronistic (with the advent of GPS, lighthouses are considered an entirely obsolete technology) infrastructural element, presumably for the salvation of those occasional wandering German tourists that seem drawn to Death Valley and environs like moths to a flame. But this not inconsiderable irony pales next to the sheer existential oomph the DL delivers.

The act of placing a surrogate human vertical marker in a forbidding horizontal landscape as easily stereotyped as the Mojave Desert precipitates an imaginational sensory and kinaesthetic engagement with an environment that is a richly detailed as any bustling urban metropolis or tropical rainforest, but less accommodating to our puny, feeble non-Reptilian physiology. As such, the DL functions as a virtual reality projector, while establishing an objective beachhead for the possibility of further real physical incursion, piercing the Baudrillardian simulacral veil with a single gesture. Or a series of increasingly vigorous thrusts, truth be told — beginning with tentative reconnaissance missions, followed by the jerry-rigged portable prototype lighthouse (whose installation triggered an official response action from the National Parks Service Search and Rescue Operations), the laborious construction and guerrilla dismantling of the DL Mach 1, the town hall meeting and other social interventions with the affected community, and the imminent climactic erection.

DL manifestations within the confines of the art world are also arguably fractal consequences of this primal penetration. But Desert Lighthouse Protocols and Desert Lighthouse Ultimatum have also functioned to reinsert the Environmental Other into the consensual cultural landscape, encoding the lighthouse’s virtual projection into a manageable scripted space, replete with visitor-center didacticisms and picture-postcard aesthetics, establishing a looping, Klein-bottle recursiveness, reiterated by the installations’ common ground – the large-scale 360-degree painting of the Hinkley site, which encloses and supports the dazzling array of entertainments within a knowing structural reference to the panorama – protypical early modern precursor of both cinema and theme parks.

Ultimately, as with Duchamp’s urinal, the fallout of outraged protests, negotiated defense pleas, and arcane scholastic speculations may be convincingly argued as the most compelling residue of the creative act of displacement. But the openness of the Desert Lighthouse Cycle (along with the other extravaganzas in Hawkins’ oeuvre) guarantees that the fallout will continue to manifest materially as well as verbally. Like the apparently unreachable landmark of Stephen King’s Dark Tower series (1982 – 2012), the incompletability of Hawkins’ magnum opus is the generative engine of entire universes of meaning.

Unlike Herzog — or almost any filmmaker — Hawkins forgoes the closed-off, cleanly referential medium that his work most closely resembles – cinema is nothing if not something other than everyday life, and once it’s available on DVD, the osmotic portal seals forever — in favor of a messy admixture, available for endless revision, endless elaboration. Where Herzog enacts epic failure to depict epic failure, Hawkins establishes a playing field where infinite failure is at least a feasibility. Infinite failure = infinite possibility. Infinite possibility = infinite opportunity. Infinite opportunity = infinite growth. With the Desert Lighthouse, Daniel Hawkins has unearthed the American Dream in the most unlikely location — its own negative spaces. 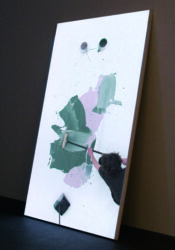 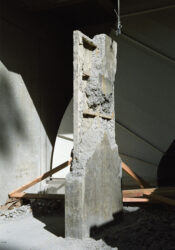 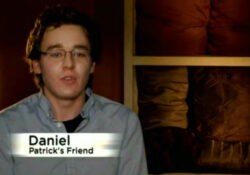 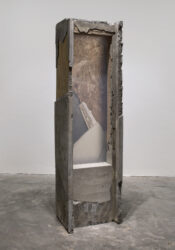