Meet the Artist Building a Lighthouse in the Desert

At first, the thought of a lighthouse in the desert seems like a ridiculous idea. Lighthouses are meant to both guide and warn ships and boats, providing a point of reference in dark and/or stormy weather. As such, the structures themselves have become emblematic of large bodies of water. The desert, by contrast and definition, is a dry, desolate swath of barren land. But if you’ve ever driven across the vast expanse of a desert yourself (especially at night), you might know how unsettling it is to not have even a tiny glowing beacon to help guide you. In this sense, a lighthouse would serve the same function as it does by the lake, sea, or ocean. It was this realization that first compelled multimedia artist Daniel Hawkins to embark on the ambitious endeavor of building his own lighthouse in California’s Mojave Desert. In fact, he already built one, but it was dismantled by scavengers. Now he’s doing it again.

Hawkins’ journey, complete with all its triumphs and setbacks, is chronicled in the Desert Lighthouse Trilogy, three separate exhibitions that are each an in-depth look at the different stages of the project, from the destruction, reconstruction, and finally, inauguration of the new lighthouse. The first installation, Desert Lighthouse Protocols, was actually the artist’s MFA thesis at University California, Irvine. The second installation, Desert Lighthouse Ultimatum, is on view at UC Riverside’s Culver Center of the Arts through March 14. The third installation is in the works, focusing on a film chronicling the rebuilding of the new lighthouse. “Together, the three installations document the complete saga throughout its years of trials, failed attempts, and finally, its permanent status in the Mojave Desert,” Hawkins describes.

The artist recalls the genesis of the Desert Lighthouse project over six years ago while on a long-haul 22-hour drive from Colorado to California: “15 hours into it I began having sleep deprivation hallucinations, many of which were constant shapeshifting light forms on the horizon, paired with the first of many severe agoraphobic panic attacks. By the end of the hallucination, the shapeshifting lights took the form of a lighthouse and upon arriving in Los Angeles, I immediately got to work.”

With frustratingly limited resources, Hawkins began working on what he called the Proto-Lighthouse. “It wasn’t the robust livable structure that I had been drafting up, but it was what I could do at the time,” he says. In June, 2010, the Proto-Lighthouse was installed on a public patch of land between Apple Valley and Lucerne Valley. “Within an hour after sundown on the first night, we noticed a helicopter orbiting overhead,” he recalls. “It was a rescue response after locals had been reporting a mysterious light to an emergency line. Reports varied wildly from a distress beacon to a UFO.”

The next year, Hawkins worked on a bigger, better, lighthouse—one that would be equipped with a livable space. “A number of locations were entertained in California and Nevada, but ultimately I went back to that initial drive with the hallucinations. The location is in a dystopian part of the desert near Barstow. It proved to be an incredibly complex area plagued by an underground shapeshifting toxic plume, nearby military test sites, abandoned towns, wandering transients, and the Interstate 15 corridor that funnels thousands of people daily through the belly of the Mojave Desert.”

The lighthouse was built entirely of wood on a cement foundation, with a cast aluminum capstone, a consumer solar power generator, and glass windows housing a rotating fresnel light. “The Desert Lighthouse project has sourced a surprising range of different technologies from rudimentary industrial motors to solar stations and streaming drone surveillance,” Hawkins explains.

He originally hoped to build the tower by himself, maybe with the helps of a few friends, but the risk of severe bodily injury convinced him to move away from that approach. The artist then contacted a local veteran to act as foreman who helped line up subcontractors to work on the foundation, framing, outer paneling, and electrical components. “I don’t know what happened, but he just up and disappeared, stopped answering calls,” Hawkins says of the foreman. “Maybe the build was too much for him, even though everything was set and moving along just fine.”

After mysteriously losing his foreman and investing $17,000 in the five-story lighthouse (not including the upgraded solar power station), Hawkins decided it was complete. Then, when he came to check on it one day, he made a heart-wrenching discovery.

“The lighthouse was completely dismantled and almost all the materials were taken with the exception of strewn splintered boards, the cement foundation, unidentifiable plastic garbage, and a small red cooler with half eaten sandwiches in it that was left presumably by the culprits,” he says ruefully. “I’m at a loss on how to accurately describe what I experienced when I first discovered the lighthouse missing. It was the most incredible wave of nausea. When the initial nausea lifted, I had racing thoughts that kept building until I had an anxious meltdown and collapsed from hyperventilating.”

Understandably, the artist shelved the lighthouse project before he could figure out his next move. Then last year, he decided to start working on its return.

Desert Lighthouse Ultimatum at UC Riverside features the 13-foot-tall top 1/5 of the rebuilt lighthouse, complete with an ultra-bright LED fresnel that is viewable through the glass facade on the ground level of the building. Upon entering, visitors are greeted with the lighthouse’s throbbing luminescence, which is flanked by two big video screens with a low-res CGI loop simulating the lighthouse’s decay. Meanwhile, the lighthouse’s beam rotates every few seconds, leaving its semi-translucent, bullet-resistant frosted plexiglas with a unique glow. Through the plexiglas, the octagonal structure’s internal steel framing becomes visible as well. The exhibition also features painted panoramic backdrops of the building site, as well as a video of the Proto-Lighthouse on a monitor with the painted landscape extending beyond the frame. There are also non-linear compositions on bulletin boards representing the lighthouse saga, which Hawkins describes as “porous inter-dimensional portals … a fractal summary and look into the interworking of the effort behind the larger endeavor.” Finally, a custom-built wall-mounted shelf proudly displays the Desert Lighthouse Prospectus, a limited-edition and collectible printed advertorial for land-art investors, reminiscent of the efforts of 19th century land speculators.

“This time around I am sparing no expenses. The lighthouse will be fully fortified,” Hawkins resolves. “It always was and is grounded in my belief in the need for this stabilizing beacon of light. It seems so essential in an era of destroyed landmarks, radical environmental change, economic turmoil, private space travel, and increasingly surreal local war games.”

But who’s to say the lighthouse won’t be dismantled again? The truth is, there are no guarantees, but that is part of the beauty behind Hawkins’ impulses as an artist: the fact that he will continue to work on his Desert Lighthouse, despite major setbacks that indicate the project is equal parts foolish and practical, but nonetheless 100% a work of art.

“The local culture is complex and hard to understand. Out there, you have anti-social recluses, born-and-bred locals, military recruits, drug-addled transients, tourists, wide-eyed LA artists scrambling for a glimmer of a nonexistent utopia, among the many and few. Somehow, the combination has stirred a brew of fierce territoriality. Everyone wants their uninterrupted delusion of the wild west, and some will go further than others to maintain it.”

This article was originally published March 9, 2015 on VICE Magazine’s The Creators Project. 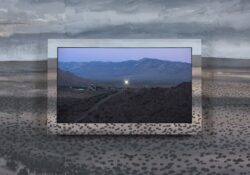 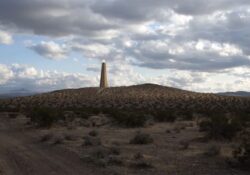 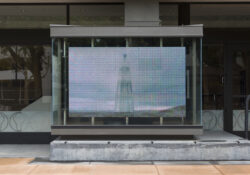 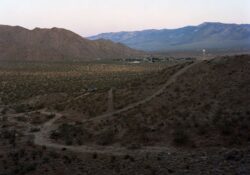 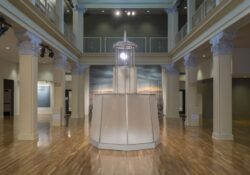