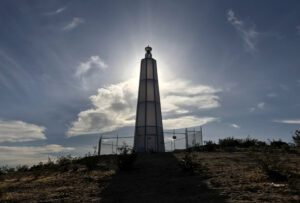 Desert Lighthouse – A Beacon of Hope for Hinkley

Rumors that the Desert Lighthouse was installed to prepare for the coming oceans or that the project may have associations with nearby military operations makes for entertaining conversation at Hinkley’s local bar Riley’s Place. However, creator Daniel Hawkins’ vision to bring a navigational and symbolic landmark for those passing through the desert has also brought a sense of pride to the Hinkley community, located 14 miles northwest of Barstow.

“A lot of people in the community still wonder “Why was it built?” said Hawkins. “There has been virtually no construction in Hinkley for many years and I think it came as quite a surprise when a large lighthouse was erected.”

The 50-foot tall fully functioning lighthouse opened in July 2017 and is a permanent on-going installation open to the public. The octagonal structure is paneled with a semi-translucent white polycarbonate siding that allows light to pass through and has a light at the top to serve as it’s “beacon.” The entire project took 10 years to complete with most of that time used to acquire the funds required to begin construction. 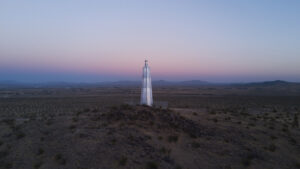 10 L.A. Artists Whose Work You Probably Don’t Know—But Should

Last year some friends and I made a list of Los Angeles artists who were overdue for local museum acknowledgment—project rooms, mid-career surveys, retrospectives, whatever—and had to quit when we reached 100. It just stopped being fun. For all the talk of L.A. as an international art destination, it still has a doozy of an inferiority complex. East coast and international art stars—and a handful of Angelenos that fit the mold—are afforded the bulk of face time, at the expense of the gazillion graduates pouring out of the dozen local graduate programs every year; the idiosyncratic veterans who didn’t fit into the Ferus Gallery agenda; and the off-the-charts originals who blossomed in the lack of limelight.

Here’s a grab bag of overlooked L.A. artists that should be pulling down the big bucks and gracing biennial pavilions. Peers and enemies will undoubtedly find my selection wanting—but that’s what comments are for.

On an unnamed road in the middle of the desert, where the sky undulates like a wave in the heat and the desert floor could be a midnight black ocean at night, the Desert Lighthouse, 50- feet-tall and a graceful beacon of light, rises.

There is an ironic poetry here. Adrift in the darkness driving through the Mojave, Desert Lighthouse is both an art installation and a welcoming brightness, centering the weary traveler, illuminating a dark corner of the earth.

Giving the rather on-going darkness of our current politics, this glowing permanent work is perfectly timed: after laborious years of planning and fundraising, artist Daniel Hawkins built this fully-functioning lighthouse in April of this year, and officially opened it to the public in July. The lighthouse stands on a hill that its creator purchased in 2011, located on the outskirts of Hinkley, Calif. 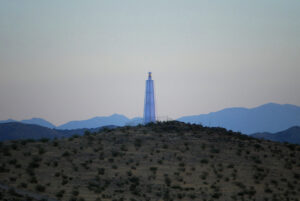 Datebook: A lighthouse in the desert, sculptures that defy gravity, ‘Snow White’ as emblem of excess

By Carolina A. Miranda

Sculpture in the desert. Works by a master of gravity. Paul McCarthy takes on “Snow White.” And Alejandro Iñárritu’s visceral virtual reality installation. Here are exhibitions and events to check out in the coming week:

Daniel Hawkins, “Desert Lighthouse.” The Los Angeles-based artist is obsessed with producing works that toy with ideas of grandiosity, failure and gestures that border on the Sisiphyean. (One of his goals as an artist is to ultimately build a scale replica of Hoover Dam.) Now Hawkins has installed a 50-foot tall, fully functioning lighthouse in the Mojave Desert in the vicinity of Barstow. The piece even features a light to guide travelers through this rugged landscape. Exact coordinates and other details are included on the website. An official launch event will take place on Saturday at 6 p.m. Hinkley, Calif., desertlighthouse.org.

Meet the Artist Building A Lighthouse In The Desert

At first, the thought of a lighthouse in the desert seems like a ridiculous idea. Lighthouses are meant to both guide and warn ships and boats, providing a point of reference in dark and/or stormy weather. As such, the structures themselves have become emblematic of large bodies of water. The desert, by contrast and definition, is a dry, desolate swath of barren land. But if you’ve ever driven across the vast expanse of a desert yourself (especially at night), you might know how unsettling it is to not have even a tiny glowing beacon to help guide you. In this sense, a lighthouse would serve the same function as it does by the lake, sea, or ocean. It was this realization that first compelled multimedia artist Daniel Hawkins to embark on the ambitious endeavor of building his own lighthouse in California’s Mojave Desert. In fact, he already built one, but it was dismantled by scavengers. Now he’s doing it again.

Hawkins’ journey, complete with all its triumphs and setbacks, is chronicled in the Desert Lighthouse Trilogy, three separate exhibitions that are each an in-depth look at the different stages of the project, from the destruction, reconstruction, and finally, inauguration of the new lighthouse. The first installation, Desert Lighthouse Protocols, was actually the artist’s MFA thesis at University California, Irvine. The second installation, Desert Lighthouse Ultimatum, is on view at UC Riverside’s Culver Center of the Arts through March 14. The third installation is in the works, focusing on a film chronicling the rebuilding of the new lighthouse. “Together, the three installations document the complete saga throughout its years of trials, failed attempts, and finally, its permanent status in the Mojave Desert,” Hawkins describes. 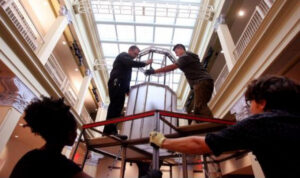 In addition to the 4 million lights aglow on the Mission Inn for the Festival of Lights, there will be one standout – a rotating beacon in the nearby UC Riverside’s Barbara and Art Culver Center of the Arts.

It’s a lighthouse, or more precisely, the top fifth of one, constructed by Los Angeles-based multimedia artist Daniel Hawkins. The 13-foot welded steel and frosted plexiglass structure flanked by backdrops of painted acrylic desert landscapes on unstretched canvas will take three days to install. It will be open to the public from Nov. 22 through March 14.

Called “Desert Lighthouse Ultimatum,” the project is part of a 40-foot lighthouse artwork. Hawkins is building it in an unincorporated area called Hinkley in the Mojave Desert, 14 miles northwest of Barstow. He did his homework, making sure the imitation mimicked an authentic lighthouse.

“Although the Festival of Lights is a spectacle bringing tourists, this project has meaning besides the spectacle of bright lights,” said Tyler Stallings, artistic director of the Culver Center. “The idea of a lighthouse in the desert is absurd and also ambiguous. A beacon in the desert suggests many things, such as spiritual renewal, drawing attention to the landscape we think of as barren in the Mojave. That area is populated by survivalists and the military and is home to secrets.” 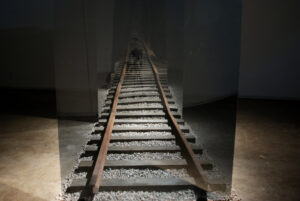 September 11 is upon us, and we all know what that means — opening weekend for the new fall line of upscale home decorations! But, hey, given the profusion of cultural fanfare marking previous anniversaries of the whole chickens-coming-home-to-roost thing (and the brouhaha undoubtedly brewing in anticipation of the imminent 10-year milestone) it’s not surprising that the art world would want to back away from geopolitical topicalism in favor of a back-to-normal (a.k.a. “Daddy Obama will fix everything! Let’s go shopping!”) mode of discourse. Which is fine. Frankly, I would consider the most self-indulgently aesthetic self-expression more authentically political than most formulaic ideological illustrations. This weekend offers the gamut, in overwhelming abundance — here are a few of the highlights to help map out your gallery-hopping:

As for L.A.’s shaky future, Saturday also features openings at two of the new model of artist-run collectives. Charles Irvin — most recently featured in the Hammer’s “9 Lives” weirdness buffet — is kick-starting his Chinatown commune WPA with a solo show titled “Four Baboons Adoring the Rising Sun,” opening Saturday, from 7 to 10 p.m. Back out West, at Godawfulist, artist Steven Hull’s newly hatched Las Cienegas Projects, emerging artist Nikki Pressley is sharing the space with up-and-comer Daniel Hawkins, a recent UCLA undergrad who has been producing some of the most interesting painting/sculpture/performance/engineering hybrids. His new piece is a sort of fun house diorama of an infinite stretch of railroad tracks, with the bells and whistles exposed. The great technological agent of manifest destiny collapsed into an obvious fiction. Say, maybe this shit is all about 9/11 after all. Never mind.